Hi, my name is Sensei Chris Brown and I’m a 4th Dan black belt in Karate. I also hold black belts in Kobudo martial arts (traditional weapons) and I’ve been teaching martial arts for over 15 years.

Karate is my passion and I am very proud to be a part of the UKSKO (United Kingdom Seiki-Juku Association). What started as a hobby has developed into a way of life and what we do helps people develop confidence, discipline, co-ordination and focus in themselves, their Karate and daily life.

I train under Sensei Frank Perry, 8th Dan Hanshi, who is not only a formidable martial artist but also a great instructor and mentor. Unlike some martial arts that just focus on basics and kata, we are a contact club and although basics and kata play a big role in what we do, self-defence and fighting is at the heart of Seiki-Juku. 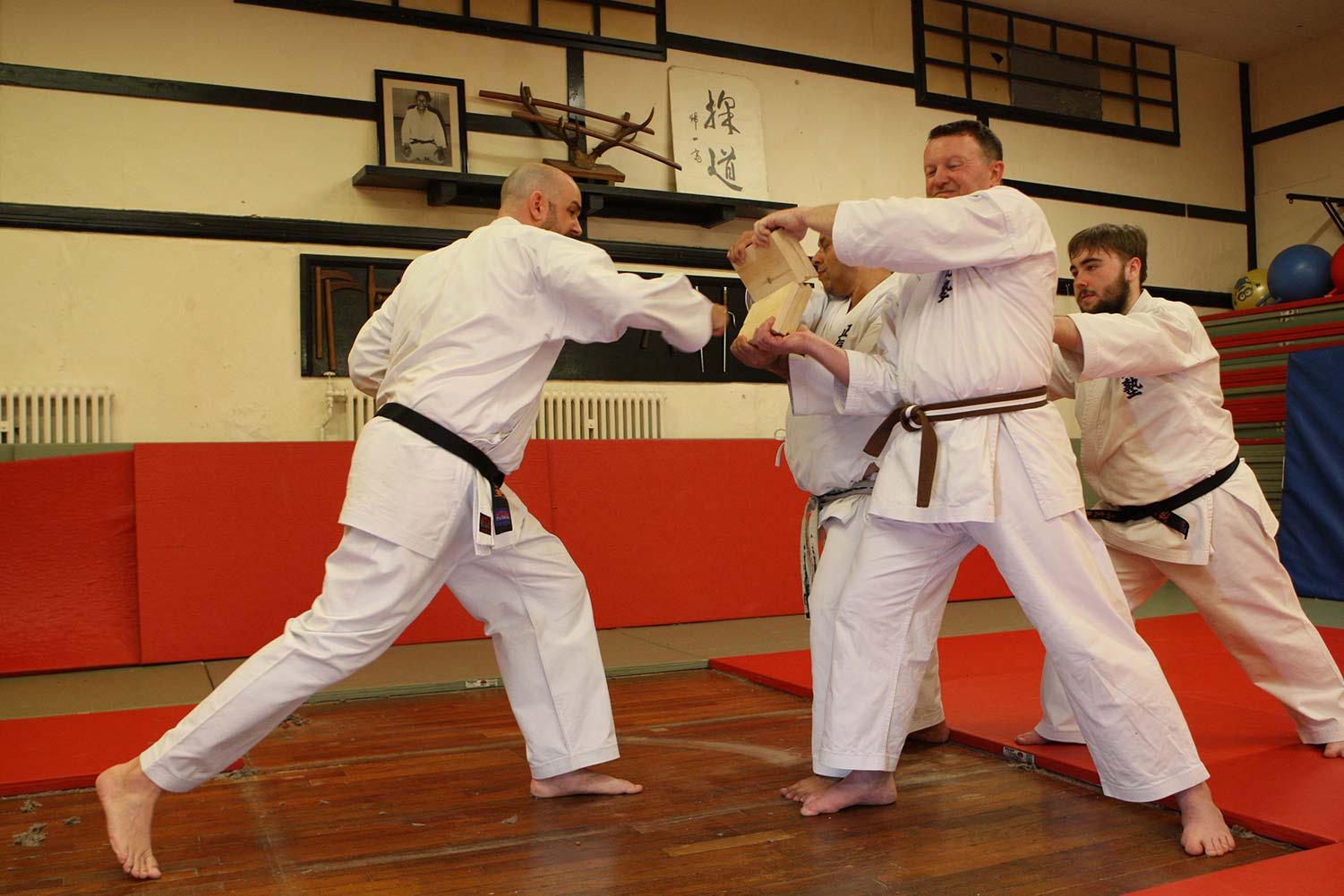 Seiki-Juku comes from a very traditional Okinawan background and is based on the three K’s of Karate;
Kihon – Basics
Kata – Forms
Kumite – Fighting

Seiki-Juku means ‘True Spirit’. The word Karate itself means ‘empty hand’, one incapable of grasping or holding onto pride, prejudice or any other selfish desire. The empty hand is to be offered to others in the service of life itself.

Yours in Karate-Do,
Sensei Chris Brown

"Chris has been teaching my daughter karate for four years now, and throughout that time he has treated her with a firm kindness which has really helped her to develop and improve her skills. Even more importantly, for me, his guidance has instilled in her a discipline and determination to learn which will stand her in good stead in every aspect of her life in future. I cannot recommend Chris highly enough as a teacher and leader."

"I am 14 years old and have been a black belt for over a year. Chris is my sensei and has been teaching me since I was 5. Karate has taught me how to be disciplined, how to defend myself in a real life situation and has built up my self confidence. It has helped me become physically and mentally stronger and forced me to become determined to succeed. Karate is fun, difficult, challenging, painful (sometimes) and rewarding: it will be a part of me all my life."

Frank Perry is 8th Dan (Hanshi) and holds Dan grade levels in Judo, Aikido, Kendo, Kobudo and Jujutsu. As a Karate Master, he runs the United Kingdom Seiki-Juku Karate Organisation, has thousands of registered students.
Frank Perry worked originally with the first Japanese Budo and Karate exponents who came to Britain. From the former, he acquired what is now a rare knowledge of the Bushido Spirit (the martial way of the classical warrior) and this remains something he wishes to see fostered today in all Martial Arts.
As a competitor, Frank Perry has fought at national and international level and his students have won numerous honours. He has devoted much time and energy to the establishment of Karate as a fast-growing sport with behind-the-scenes work on the English Karate Council (the former governing body), of which he became Vice-Chairman in 1988. 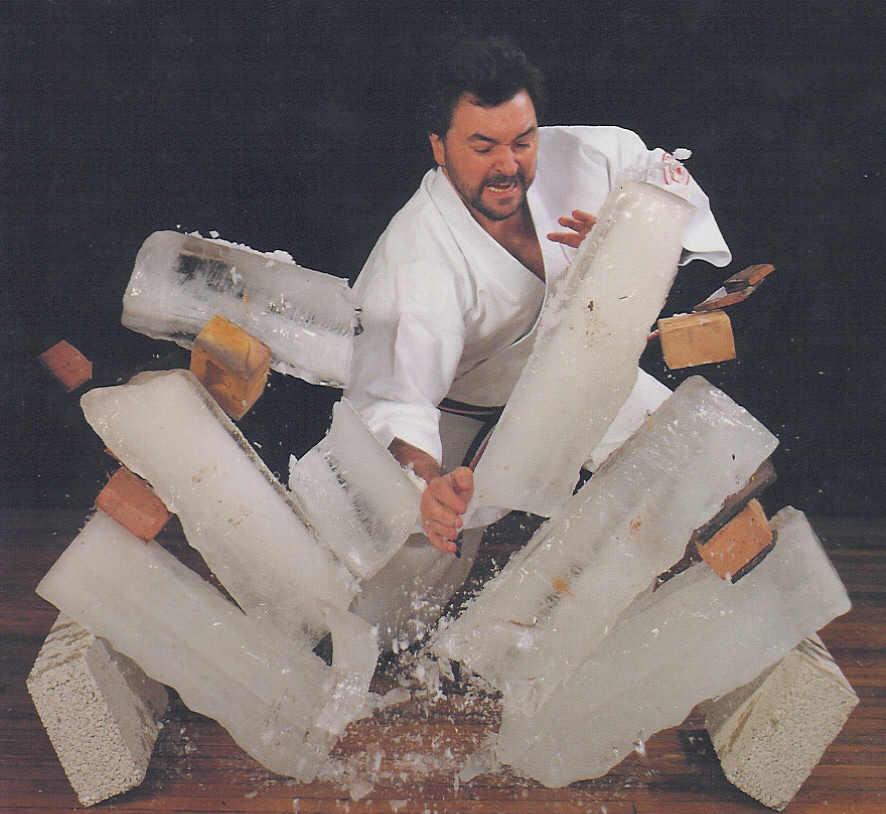 He was also Chairman of the English Karate Council Technical and Coaching Committees and the English representative to the British Karate Federation. Other appointments include that of Chief Instructor of the United Kingdom Seiki-Juku Karate Organisation and of the Koku Sai-Budo-Shingi Kai.
Frank Perry has presented Martial Art techniques for television and was the subject of the first ever documentary Karate film distributed nationwide in cinemas. This film demonstrated, among other Karate techniques, the build-up to his successful breaking of a stack of nine huge ice blocks with a single hand strike in a display of tameshiwari never seen on screen before.
“In 1957, when I was only four years old, my elder brother took me along to see what went on at our local Martial Arts school where Sensei Kaoru Mishiku taught Judo, Ken-jutsu and Ju-jutsu. At first, my brother and other students regarded me as no more than their ‘mascot’, but what had started out as a joke soon became quite a serious business. For, despite my age, I established an almost immediate rapport and understanding with the sensei (teacher). I was accepted by him as a regular pupil and continued to study with him during the many years that followed.

Sensei Kaoru Mishiku was Japanese and of true Samurai stock. He had come to London from Japan in 1909 and he remained until his death. Around the early sixties, the first of the Karate Masters from Japan arrived in London, some at the invitation of Sensei Kaoru Mishiku. So, at the age of fourteen, I found myself taking up Karate as a natural follow-on to the other disciplines I had studied and continue to study today.
In fact, my whole life has been centred around and consumed by the study of Martial Arts and of Karate in particular. I can only assume that having taken up Martial Arts at such a tender age explains why I now regarded doing Karate and enjoying Karate as a normal way of life. Karate has taken me all round the world as a Martial Arts student, instructor, coach, competitor and simply as one in pursuit of personal knowledge about Karate and its roots. The physical and spiritual rewards have been limitless and have enjoyed the meeting and exchange of respects with many great people.”

We use cookies to ensure that we give you the best experience on our website. If you continue to use this site we will assume that you are happy with it.AcceptPrivacy Policy